Construction of the Edgewater hotel began in 1923. With the placement of the final brick on top of the east wing facade on June 1st, 1926, the facility was completed, as a bright, clean, and modern three-story building that was the culmination of local pride.

The Edgewater opened January 26th, 1927 having the designation of being one of the safest and most technologically advanced hotels in the country. It quickly became a Sunday afternoon destination for many families that drove for miles around to admire, stay in, or just wander around the hotel’s four spacious hallways.

The Edgewater originally played host to businessmen looking for a winter hideaway to discuss important business ventures, the Washington Senators during spring training, and famous Hollywood celebrities (such as Clark Gable) visiting friends and enjoying the springtime climates of Florida. 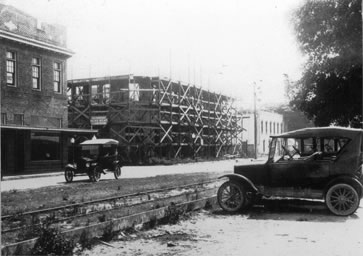 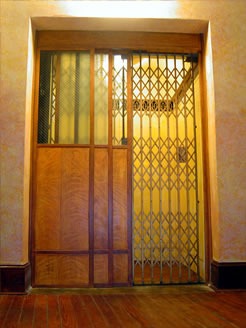 The manually operated Otis elevator, being one of the first in the area in 1926, was an attraction all in itself. The elevator remains unchanged and in perfect working order to this day. The building featured a sprinkler system throughout its 30,000 square feet that, like the elevator, has been well maintained and in continuous operation since 1926.

In the late thirties, Winter Garden was a destination resort area due to the bass fishing abundance of nearby Lake Apopka. In 1936, local businessmen leased the hotel, installed a large lobby fireplace, and equipped each floor of the facility with a fish cleaning station made of a sink and refrigerator. They marketed the facility throughout the United States in Field and Stream magazine as a full service fishing lodge.

In the early to mid 1940’s the Army utilized the hotel during World War II to house soldiers on their way overseas. The impact of the soldiers’ stay at the Edgewater can still be evidenced by the telltale wear marks on the hotel lobby floor. Later the hotel contributed to the post-war American dream by hosting schoolteachers busy with the demand for better education.

In the late 1960’s and early 1970’s the hotel accommodated crews working on a little known construction project, the creation of Walt Disney World.

On November 8th 2003, 35 years after the hotel had closed its doors; the Edgewater cut the ribbon on a grand reopening of the facility. After an extensive historic restoration of the building, visitors once again have the opportunity to stay in the same accommodations as the wealthy business tycoons in the 1920’s.

Many people who come to the hotel are intrigued about the history of the hotel and the furnishings and decorations that are in the halls and rooms. While offering the necessary modern conveniences (like air conditioning, internet access, satellite TV, and the like), it has been our goal to recreate an experience for guests of an authentic Florida hotel stay in the late 1920s when the hotel first opened. In that spirit, we would like to share some of our research into the time period that has guided us in the hotel’s restoration.

Included in some of the rooms and the hotel’s décor are silk flowers. Many people believe that silk flowers are a more modern creation; they were prevalent in the 1920s and have their roots much further back in history. CLICK HERE for more information on silk flowers and their unique history.

The breakfast menu at the hotel is modeled after the style of breakfast that was offered at the hotel when it opened in the 1920s. Back then food was served where the Thai restaurant is now, and it was called the Evergreen. The Evergreen served traditional Southern meals and breakfasts that consisted of the same menu items we offer today: eggs and toast, bacon, grits, sausage, pancakes, French toast (known then as lost bread), or waffles, at a prices of twenty to fifty cents for the average breakfast. CLICK HERE to learn more about the evolution and history of the breakfast served at the Edgewater.|